After a 5 hour sewing session I have finally finished the black applique on the skirt :) There are times when I never thought I would see the day lol. I have lots of tiny sections to do one the 'gold' applique now, and then its onto the hand couching.

I have drawn up sketches of the buttons and sent them off to a 3D printer who can apparently convert my pictures into actual prototype buttons via CAD software. It took me hours of staring at the button in the portrait and then about 5 hours of drawing and redrawing before they were somewhat similar to the dress buttons. Impatiently waiting to see what they come back with....

In the meantime, I finished off my blue dress for the 2012 Italian Renaissance Costume Challenge. It was based on Eleanora of Toledo's burial dress. I chose the dress because the bodice and skirt pattern are the same as I am going to be using for the Eleanora dress and thought it would be a good opportunity to test wear the pattern. I have made the dress too long though and consequently its not sitting perfectly on the front hem. A quick tuck will fix that. 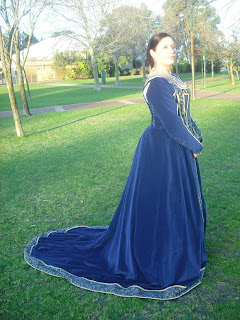 Next on the agenda...well one of the next projects in the pipeline is the Perfectly Period Pink Challenge running between September 15 and October 15 which is to raise awareness of Breast Cancer. I have picked out a lovely dress in pink and white stripes - and yes its period :). 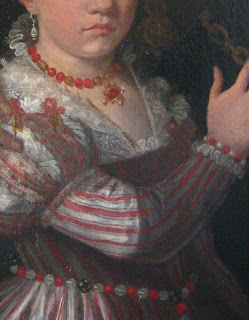 I was lucky enough to have a day off to myself to go fabric shopping on Monday, and you will never guess what I found..... 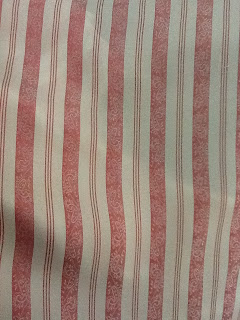 Pink and White striped Silk! at only $10 per meter!!!! They only had 11.5 m left so I bought it all. Its a little light and very slippery so I will probably need to self line it, but how perfect is the colour?

More pics of Eleanora soon :) I haven't got hold of the high resolution pictures that were taken yet. 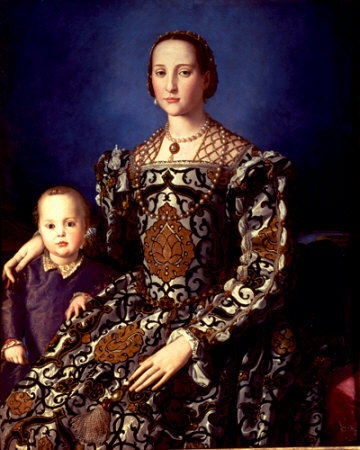